In open air tanks, the pressures displayed by manometers correspond to the heights of water above the measuring point.

On a horizontal axis, pressures are identical.

We may be surprised to see that the pressures are identical at points A and B above, despite the heights of water above them being different. In fact, at point B, it is not the height of water immediately above which counts, but the difference between point B and the high water level at C.
Indeed, pressures don’t have a “sense of orientation”. The molecules in A are “squashed” by the weight of the water molecules above and they transmit this push as much toward the bottom of the tank as toward the molecules at B, which are, because of this, subject to the same pressure.
Another way to express this phenomenon is to show that if the molecules at point A were under a stronger pressure than at point B, there would be a movement of water from A to B. While in fact our tank is static.

Show in [bar] the pressures in the tank.

These expansion vessels are simply open-air tanks installed at the highest point of the central heating system and connected to the boiler outlet. They accommodate the “surplus” water, which has expanded due to its increase in temperature.

In heating circuits, equipped with open expansion vessels, the pressure only depends on the height of water between the measuring point and the high level in the vessel.

Indicate in [bar] the pressures shown on the manometers below. 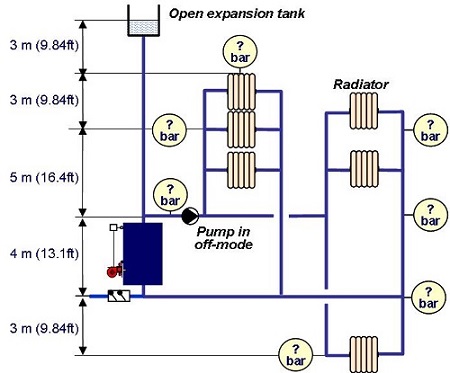 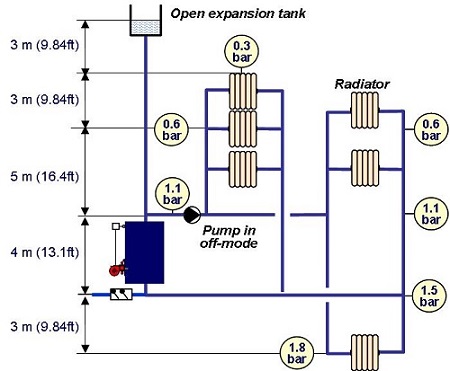 Start the film below (switch on the sound) and watch the water filling of a heating system equipped with an open expansion tank.